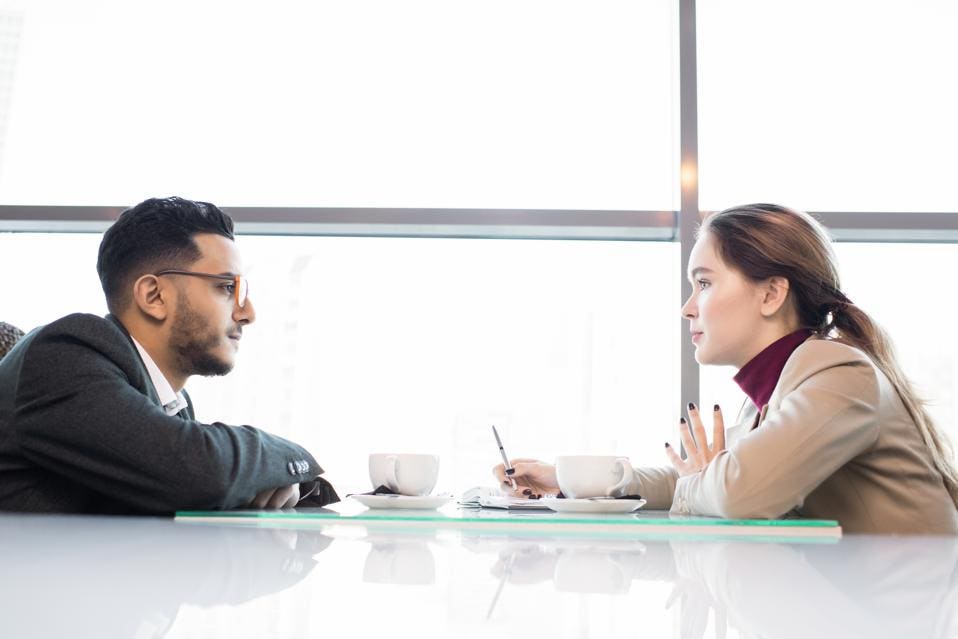 Just about every time I walk into a Starbucks these days, I run into someone preparing for a job interview—and almost always they’re amped up on caffeine and headed for disaster. No matter how much they rehearse and prepare, they can’t avoid the No. 1 way to mess up a job interview: failing to master the mental game.

And it happened again.

While in a Starbucks the other day, I spotted a young man in a suit and tie, lip-syncing and gesturing with his hands—clearly rehearsing for something. Suddenly, he rushed away, leaving his laptop and briefcase on the table.

Fifteen minutes later, he returned—face pale, jacket off, shirt damp with sweat. He thanked me for keeping an eye on his stuff: “I threw up. This always happens to me before a job interview.”

This guy was a classic example of a disaster in the making: going over and over his resume, as if the hundredth time he practices saying he’s a “self-starter” and a “team player” with a “can-do attitude” will be the key to success. Making it worse, he already had a track record of interview failure. “It’s happened four times in a row,” he admitted. “I know what I want to say, but when I get in the interview I just freeze.”

When he went back to his one-man-show rehearsal, silently going through his “script,” I just had to stop him. “Sorry, but you need to change your approach—and fast.”  Here’s what I told him:

Get out of your own head: In the best case, a job interview is somewhere between a trip to Disneyland and a visit to the dentist to get your wisdom teeth extracted. You’re looking forward to it, but you also dread it. In the worst case (such as this guy), it’s all dentist, peering into the farthest reaches of your gum line and calmly saying, “You might feel a pinch (code for “this is going to hurt like hell”). Stop psyching yourself out!

You’re not auditioning for The Voice: At the eleventh hour, there’s nothing on your resume that you haven’t read countless times before. Stop rehearsing! This isn’t time to decide how to answer the predictable, standard questions about your accomplishments, strengths and weaknesses, or how you picture yourself contributing. You should know that long before. In the hours before the interview, it’s not about content—it’s about composure.

You’re not being interrogated. No one is going to shine a light in your eyes and ask you where you were the night of the fourteenth. It’s a conversation, pure and simple. It starts from the moment you arrive. Smile at people, make small talk with everyone. Observe your surroundings and pick up on any detail—a picture on the wall, the view—that you can comment on to break the ice. During the interview, don’t wait until the end to ask questions. Make sure it’s a give-and-take between you and the interviewer(s). You’ll feel more relaxed and in control.

Think about your dog (or another loved one): No matter how much you want the job, this interview is not the most important thing in your life. Family, friends, your pet all outrank it, because they reflect who you are as a person. Keep a picture of what matters most to you on your phone or in your pocket. Just before heading into the interview, take a last look at that photo to keep your perspective about who loves you. Think about when the interview is over and you’re going home to see your family, relaxing with friends, walking your dog. Imagine how you’ll feel then. Picturing a successful outcome will go a long way to achieving that reality.

Breaking the cycle. The young man at Starbucks had more than two hours before his job interview two blocks away. If he sat there through 120 agonizing minutes, I doubted he’d even make it through building security. He needed to break his pattern. I asked him about his passion and interests outside of work—who he was, not just what he did. “Art,” he said, without hesitation. Across the street from the Starbucks was a museum. I reached in my pocket, pulled out a twenty and insisted he let me treat him to admission. “Go look at something beautiful,” I told him. “Change your thinking.” He protested a little—breaking the rehearsal habit was tough—then put away his resume, picked up his briefcase, thanked me, and headed for the door.

Later in the day, I received an email. “Loved the museum—great art. And, I’m headed for round two next week!!”

After conquering the mental game (and some stomach issues), nailing the interview was easy.